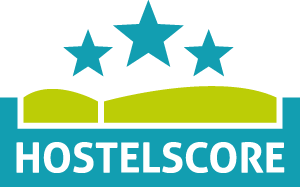 I am a solo female traveler and I was happy to meet a lot of people from around the world. I stayed in a mixed 6 person - bedroom for 4 nights and 3 days. I had social roommates who visited the East Gallery Wall and Wannsee Beach with me and then I explored the Berlin nightlife with my roommates and the people in the next room. We loved the Hostels' rooftop bar as a start to our night and visited multiple bars in the surrounding areas. A few of us decided to travel to Amsterdam together because we became really good friends! I recommend this place for solo female travelers because safety is not an issue.

The room and bathroom were cleaned daily and the staff was helpful. I was unaccustomed to carrying cash/coins with me, but the staff was able to exchange my bills for 50 cent coins for laundry machines ( 4 washers and 4 dryers).

I stayed here with 2 friends in a dorm to ourselves. I had stayed in other Wombats hostels in Europe previously and pretty much knew what the expect but it definitely exceeded my expectations.

The location is great, just a short walk from Alexanderplatz and the TV tower and with numerous U and S bahn connections close by. The area itself is also well serviced with restaurants and there are loads of decent bars within walking distance but it's also a short train to the busier club areas if that's more your thing.

Our room was spacious with a table and chairs and a decent sized en-suite and we also had a lovely view of the TV tower from our window. Beds were comfortable and clean and what you'd expect from a good hostel. My only complaint was that the room got very hot in summer and the small stand up air con unit didn't really work and it would have been better to have a proper air con unit with remote. The curtains were black out though and keeping them closed while we were out helped keep things a little cooler when we came back in the evening.

I really liked the rooftop bar which had a lovely terrace with views of the city, chilling up here with a few drinks in the evening was wonderful and surprisingly for a large hostel it wasn't too hard to socialise with the other guests although I still personally would not pick a large chain hostel if I were travelling solo and wanted to meet others.

I'd have absolutely no problem recommending this hostel for others, particularly groups and we already have plans to come back next year for a weekend!

I stayed in Berlin for two days, one night. I arrived at 7am to the hostel (since my bus arrived at 5:40am). Apparently it's not a common thing or something to arrive that early to a hostel? I was well aware that check-in wasn't until 2pm, which I told the receptionist and asked if I could just leave my bag in the storage. He had a very serious, angry look on his face and told me that "It is already 7am, I have cancelled your reservation".

What? I stared at him. I thought he was joking. But nope, he firmly told me that I should have gotten here the day before after 2pm. Since I arrived after 7am, he cancelled my reservation. I was stunned. I told him that I have my reservation for tonight only, how could it be cancelled? He said that it was. After a minute of going back and forth, I was able to pull up my reservation and he realized that it was for tonight (as in later on that day, not the night before). He told me that checkout is at 2pm. ???!! I told him that I said that I was aware that checkin is at 2pm, I just need to leave my bag.

Beforehand, though, I asked if I could use the bathroom. He gave me a roomkey with a lock on it and said that this room on the first floor was for the toilet and that I could use it. Great. I go up, I go to the bathrom, quickly change my shirt and put on deodorant, pull my hair up quickly (I had just gotten off a 9 hour bus ride). When I go to open the door, I realize that he had been knocking on the door. He said: "I said that this room was for the toilet," and I look at him funny, "Yes, I know that. I was quickly changing my shirt since I was on a bus all night." He apologizes (but clearly didn't mean it), saying again that the room was only for the toilet and that he thought that I wanted to sleep in the room. I told him that I heard him the first time, it's only for the toilet, but I needed to change my shirt.

So, in other words, off to a bad start. I go off and enjoy the day until 2pm. I checkin, get my sheets, etc. I go up to my room. Not bad at all, very clean with lots of light. When I go to make my bed, I see that my bottom sheet has a lot of piling (the balls on the sheets) and the duvet is incredibly thick (not great for a summer night). Whatever. It's a cheap place, but I do wish that they had summer duvets especailly since there's no air conditioning in the rooms.

When you checkin, the hostel also gives you a voucher for a free welcome drink. I went up that night to redeem it, but lo and behold -- the rooftop bar area is not handicap-accessible. There are stairs with no railing at ALL. I could have stayed inside, but it was stuffy (again no air conditioning). I left my voucher on a table and went back to my room.

My roommates left the windows open before they left for the night, which was fine. But apparently we were facing some food place, and the room started smelling like onions. I closed the windows somewhat because the smell was too much.

The next morning, I had the breakfast in the hostel. Which wasn't bad at all! Hams and cheeses, bread, coffee, cereal....and hard boiled eggs!! Which has been rare for me to see. I ate and checked out. I was able to leave my bag in the storage all day which was nice.

All in all - would I stay here again? Only if this was my cheapest option and closest option. I didn't like the actual area it was in (had to go out of my way to find a grocery store!), but it was close to the tram so easy to get around.